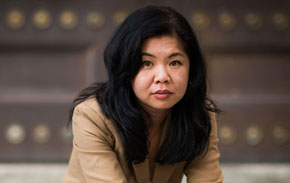 The Durham Law firm of NicholsonPham is pleased to announce that Milan Pham will be participating in an event sponsored by Women’s Studies, Center for French & Francophone Studies at Duke University. Entitled “Kinship Trouble, The Equality and Difference Debates, NC, USA – France, Europe”, Milan will be participating as a speaker participant representing and elucidating on the status of equality laws in our state.

Milan Pham is a lawyer in Durham, NC focusing on issues affecting marriage equality and the lives of LGBTQ citizens in the North Carolina community. She is a member of the Family Law Institute a division of the National LGBT Bar association that serves as a coordinating hub for much of the current marriage equality litigation, she is part of the organizing team of the Durham LGBTQ Center, and serves on the Board of Planned Parenthood of Central North Carolina. She has recently become involved with the Durham People’s Alliance’s Economic Justice Committee. She has served as the Orange County Human Rights and Relations Director and in many other capacities over the years. In 2012, Milan was named as one of the top 100 lawyers of color in the south and Durham Magazine named her as one of the “35 Women Who Are Changing the Face of Durham”.