The Durham law firm of NicholsonPham, PLLC, is proud to announce that partner, Milan Pham, is the recipient of the 2014 Community Impact Award, given annually by the LGBT Center of Raleigh. Milan was presented with the award at the LGBT Center’s 6th Annual Awards Gala on October 10. 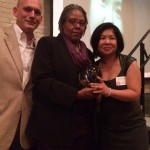 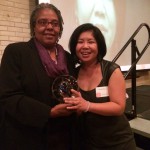 Milan is recognized for this award for her expansive work toward equality for the LGBT community. Far surpassing marriage equality issues, employment and income equality, fair housing, high rates of LGBTQ youth suicide and poverty, are all on Milan’s radar. Representatives of the LGBT Center of Raleigh say, “Milan Pham’s work has made an impact for our community that can be matched by only a very few people. The LGBT Center of Raleigh is deeply grateful for her work as an advocate for us and is proud to recognize her with the Community Impact Award in 2014.”

Milan is a member of the Family Law Institute a division of the National LGBT Bar association that serves as a coordinating hub for much of the current marriage equality litigation, she is part of the organizing team of the Durham LGBTQ Center, and serves on the Board of Planned Parenthood of Central North Carolina. She has recently become involved with the Durham People’s Alliance’s Economic Justice Committee. She has served as the Orange County Human Rights and Relations Director and in many other capacities over the years. In 2012, Milan was named as one of the top 100 lawyers of color in the south and Durham Magazine named her as one of the “35 Women Who Are Changing the Face of Durham”.