Following decades of service toward equality, for women in the practice of law and for the LGBT community, Sharon’s efforts have been covered by the National Law Journal. Available only by subscription, the NLJ covers eight women attorneys from the Carolinas. As a follow up to the NLJs recent articles on Carolina corporate counsel, the second part of their investigation is entitled “Two Steps Forward in the Carolinas” and focuses on eight women making a difference. Also included were Alice Paylor and Elaine Fowler, of Charleston, South Carolina; fellow Durham lawyer Carolyn McAllaster; Chief Judge Linda McGee of the NC Court of Appeals, Raleigh; Katy Parker of Wilmington; and Chief Justice Jean Hoefer Toal, Supreme Court of South Carolina and Pamela Roberts, both of Columbia, SC.

For Sharon’s part, the NLJ says: 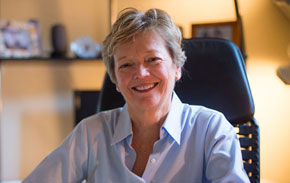 Sharon Thompson is a member of two minorities when it comes to the legal profession: She’s a woman and she’s a lesbian. So it’s perhaps not surprising that she was a founder of pivotal support groups for each in her state — the North Carolina Association of Women Attorneys in 1978 and the North Carolina Association of Gay and Lesbian Attorneys in 1994.

Amid the feminist movement of the 1970s, she and many of her contemporaries banded together over issues of unequal treatment of women in society. In law, too, “we needed help navigating in a world that could be hostile at times,” Thompson said. “We advised each other on what to wear to court. Do you wear a skirt to help your client? How do you respond to a sexist comment? We all had our stories.”

She and other women attorneys started their own “good ol’ girl network,” focused on getting women appointed as judges and winning leadership positions in the bar association. One of the big issues that many women struggled with then and now is how to be a good lawyer and parent simultaneously.

“On the surface, things look better, but women are still treated differently,” said Thompson, who now focuses on LGBT legal issues, including adoption. “Women are still penalized for their parental commitment, a choice male lawyers very infrequently have to make.”

Thompson’s willingness to take on the profession’s status quo as a gay woman has inspired the next generation. “Sharon is a trailblazer in the truest sense of the word,” said Meghann Burke, the legal team leader for the Campaign for Southern Equality and an attorney at Cogburn & Brazil in Asheville, N.C. “A time like this, when marriage equality finally arrives in North Carolina, would simply not have been possible without Sharon.”

Thompson has been the recipient of numerous professional honors, including the state bar’s Distinguished Service Award and the state ACLU’s Frank Porter Graham Award.
“We may be a majority in society,” Thompson said, “but we are not defining the normative behavior for the profession yet.”

For the full article on these amazing Southern lawyers and judges, read more at the National Law Journal here: http://www.nationallawjournal.com/id=1202673119148/Two-Steps-Forward-in-the-Carolinas#ixzz3G3GNe7yT. You can acquire a free account (up to 5 articles a month) by signing in through your LinkedIn profile.